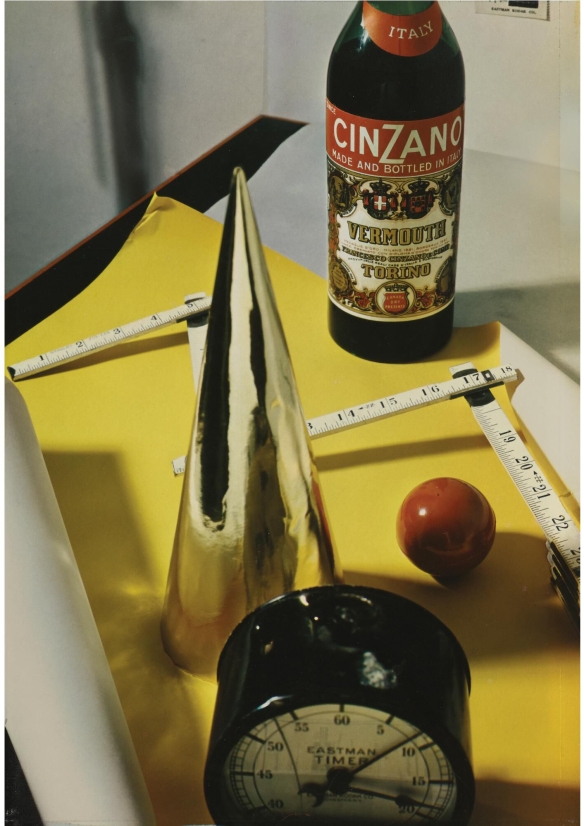 You’d hardly call Paul Outerbridge a nearly man, yet he really was.  In the 1930s, he was one of the leading advertising photographers in New York, certainly among the best paid. He gave himself absolute mastery of the sculptural photography of the object-shot which derived its techniques from nineteenth-century studio perfection and its aesthetics from European modernism and surrealism.  You might think of his early work in black & white as the photographic moment of streamlining – sleek, shiny, geometrically balanced images of such quintessential stuff for the get-ahead All-American consumer as cigarettes and lighters, car accessories, and all the paraphernalia of drinking.  That kind of photography was maybe invented in Europe but translated into advertising both in Europe and in the US. Think of names such as Maurice Tabard, making perfect pictures of shiny cigarette lighters in the early 1930s, or even Charles Sheeler, working out a truly American aesthetic.

Outerbridge worked in Paris as an art director for Vogue between 1925 and 1929.  When he came back, that vision, of silvery precise modernity in silvery photographs (although to be scrupulous to Outerbridge, they were in his case more often platinum), became newly accepted for printing in the magazines. Although they had had the technical wherewithal to print pictures in among the text for some time, they had tended throughout the 1920s to use illustration for advertising in preference to photography. There were dozens of forms of commercial expression in the 1930s – but modern design sleekly offered to the discerning consumer was one of the key ones. It was even plausible to hope that the new consumer, urged on by pictures of that kind, could drive America out of the Depression.

Outerbridge knew Eduard Steichen very well.  Together, they were the drivers of the new commercial photography and had an apparently friendly rivalry: there is even a story that at one period in the late 1920s they exchanged ever-more perfect studies of eggs (in a contest that one much later reviewer referred to as a ‘bake-off’).  To Steichen’s astonishing textile designs (in photographs) of the mid-1920s for the Stehli silk company, compare Outerbridge’s Collar, for the Ide company, of 1922.  Some of the Stehli designs are in Steichen’s autobiographical monograph – and very well-known since: the Wandering Thread, the light through the glasses.. but others are less well known: a pattern made out of beans, another out of sugar lumps.

When Outerbridge arrived in Paris and came to know the circle Man Ray had made there (he had known Man Ray in New York before), he was gratified to find his Ide Collar, torn out of a magazine to be pinned on the wall of Marcel Duchamp, who touted it as the perfect ready-made.  The stiff collar is positioned on a checkerboard pattern, after all, and Duchamp always loved chess.

And that stiff collar is itself a great modernist icon.  Although they seem so quaintly old-fashioned to us, removable celluloid collars (or cloth coated in celluloid) were a boon to the new man making in his way in the city.  You could simply wipe the collar with your handkerchief and wear the shirt the next day.  My grandfather remembered English city types struggling to pop their collar studs off to wipe their collars after a ride to work on the Tube, then still driven by steam engines and therefore smoky.  Griffiths, the miserable hero of Theodore Dreiser’s An American Tragedy, found a job when he needed one in his rich uncle’s collar factory and there got one of the factory girls pregnant.  Impossible to believe that Dreiser didn’t think that old, old story somehow more poignant being set in such a symbolically modern context. An American Tragedy was published in 1925 – it matches Outerbridge’s great early picture for date.

At the end of the 1930s, Outerbridge devoted himself to experimenting with colour.  He made himself by laborious effort the absolute master of a process we now associate immediately with him, the tri-carbro process.  But the story starts to unravel a bit at this time, too.  First, he retreated to the family home, in suburban Monsey, New York, and accepted far fewer commercial commissions. Then it began to appear that his tri-carbro prints were too expensive for commercial users anyway. Tri-carbro looks wonderful, with something of the hazy density of colour of autochrome. But as a commercial process it became really too slow: it took Outerbridge up to nine hours to make a good print – and he only made good prints.  They also cost him $150 dollars each to make in the money of the time. That didn’t give his clients many to choose from.  At the same time, new processes, including dye transfer, were beginning to be not only available, but capable of very fine results.

He started to make nudes, variously described as ‘risqué’, ‘avant-garde’, and so on.  A catalogue description on the Met Museum’s website accompanying one of them still purses its lips in prudish disapproval:

Photographing nude models in color in the 1930s was challenging—not only in the difficulty of correctly capturing skin tones using complicated new processes, but also because finding a venue to publish or exhibit the work was unlikely. Although he began by posing his models in the manner of painted masterpieces, Outerbridge’s compositions became increasingly provocative in the late 1930s. The sexualized charge and commercial palette of works such as this were not in keeping with attitudes of the period and were not shown

And then indeed, not shown becomes the phrase of his life. There was a scandal of some sort about the nudes.  I seem to remember (but cannot now find) a description of him drinking too much in the late 1930s.  He moved to Laguna Beach in California and sort of .. dwindled until his death in 1959.

But it’s enough. The influence of the wonderful things that he made goes in all sorts of directions.  Plainly, some of the lovingly crafted still life studies of Irving Penn owe a lot to Outerbridge (I’m thinking most particularly of the lovely Composition with Triangle of 1985, done for Fuji, very similar to the Kandinsky here in its treatment of specifically photographic objects).  The famous studies of tools that Walker Evans made in the 1950s have a loving memory of Outerbridge platinum about them – and it’s hard to imagine that Guy Bourdin had never looked at Outerbridge.

It goes on, to a surprisingly contemporary degree. This Kandinsky, for example, with its deliberate look of an experimental set-up and its deliberate references to technical photographic equipment (the timer in the foreground, those sheets of background paper, but also the greyscale just visible, tacked to the wall at the very top of the picture, which reads Kodak) seems a clear precursor of the work Christopher Williams has made, braiding and rebraiding the differences between photographic space and the space it depicts.

Outerbridge does sit at crossroads that go in many directions.  He was a first-rate commercial person, and a first-rate artist, too.  He’s American informed by Europe, he’s interested in film.  He is not frightened to make fetishistic photographs but refuses to compromise by using Kodachrome until it’s too late for his career.

That’s partly why I want to add this to my little fantasy collection; I like that so many things meet in this picture. There was a reproduction of Outerbridge’s Images de Deauville, rather similar to this, but less mysterious, on the cover of a Thames & Hudson book called Photography as Fine Art, published in the early 1980s and which I used enthusiastically as a guide.  That may be part of it, too.

The first actual prints I saw were shown to me by the late and regretted Paul Kasmin, who died earlier this year. I can’t remember the date, but he had not left London at the time for New York, so perhaps in the mid-1980s. They were nudes, certainly, and while not pornographic, they had an enthusiastic sexual vigour about them which might well have put off the very different audiences of thirty or forty years earlier (at least in public).

This picture itself, apparently so obviously a branded advertisement, is in fact nothing of the sort.  It’s a training exercise, but a virtuoso one, a bit like watching Roger Federer hit balls before a final. That’s why the whole of its left side has that informal, edge-of-the-set feel. The crumple in the bit of paper, the unresolved shadow on the far wall, the papers not pulled to edge of the table. The first challenge was that splash of red; could a champion colour printer save it from being bullied by the yellow? Outerbridge could.  I see the allusions to Kandinsky, but I don’t fully understand this picture.  I’m not going to get bored of it, thinking I know it too well.  Only this morning, as I sat down to write this, did I realise that for some years I have enjoyed the little joke of that Z in the brand name on the bottle magnified in the white measuring rod which snakes across the table. That itself for some reason has an arrowed double ZZ printed upon it every few inches. I’d seen that many times, but without really acknowledging to myself how much pleasure it gave. Only a second ago, I noticed that Outerbridge took a pull at the bottle at some stage before making the picture – the level is below the neck label that bears the single word Italy.

One thing I do know, is that Outerbridge is in there himself, as shadowy as he was in reality, lurking crouched in that silver dunce’s cap, watching us watching him. I even think he wrapped himself in a cloak of some kind to avoid being distinct.