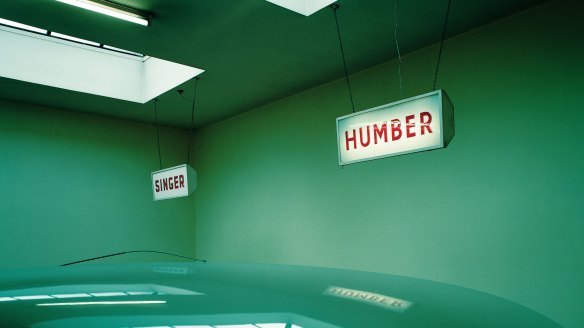 Paul Graham changed my attitude to colour. An excerpt from a gallery text on his own website says that he “belongs to a rare group of photographers that were the final generation to enter photography before it became part of the broader contemporary art world.”  That’s true, and it has nothing much to do with exact dates.  Along with such as Philip-Lorca di Corcia and even Nan Goldin, Graham remains a photographer, not an ‘artist-working-with-photography’.  Graham won the Hasselblad award last year (2012), the first Briton to do so. He’s an international player. Yet, in our very British way, in the UK he’s hardly known outside photographic circles.

When Graham started, documentary photography (at least in Britain) was in black-and-white, and it was about telling the truth.  After him, it was in colour, and it was about having a view.   Richard Billingham, Martin Parr, Nick Waplington, Paul Reas, Donovan Wylie, Anna Fox, even Gillian Wearing…a generation of British photographers, shading off in all directions towards art, were liberated by, and in some sense indebted to Graham.

In the early days, Paul Graham did eye-watering things.  He went to Northern Ireland in the middle of the Troubles and made beautiful, even romantic landscapes with just the tiniest glimpses of all being not well.  He made a record of Britain on the dole in the Thatcher years that would (I’m not joking) have brought down the government had it been published by a major novelist or film-maker.  But he was a youngish photographer, and it passed.

In that same period, Paul Graham went on an absurd road trip up the A1.  The A1 is to road trips as a fairground choo-choo is to the TGV.  It was so British it wasn’t even a motorway.  It still isn’t, as a matter of fact. And on this ridiculous road, with culture and reflexes and patience and sympathy and wit, Paul Graham began to make pictures about what it meant to be European as Europe fell away from dominance.  He was literate in photography – and in a lot of other stuff, too – and he made out of the sleepy cafes and uninspiring landscapes of the A1 a vision so much bigger than the A1 that everything he has done since has been checking the wake behind.

Of course Graham had seen his Joel Sternfeld and his Stephen Shore and his William Eggleston and his Joel Meyerowitz. But still.  A subaqueous car showroom, in which the only line of black is a twisted aerial?  And those names, perfect for cars:  here we go, in the money of 1950 or so, Singing and Humming along.   I don’t even think Humbers were still manufactured when the picture was made: sold to Chrysler or somebody, and then again, to become Talbot, I think, then swallowed up in Peugeot.  This showroom was drowning even as Paul Graham photographed it. The Singer, descendant of the sewing machines which represented one phase of the Industrial Revolution.  And next to it, the Humber, named after the great estuary that watered part of that British industrial landscape.  All going under, in the early days of Thatcherism. It’s very simple: I know intimately the culture this picture comes from.  I even remember the smell of those places, of T-Cut and spilt petrol.  In Britain, this is a brilliant, game-changing picture.  But it also speaks right to me.

Paul Graham’s early prints are absurdly undervalued.  You can buy them from Pace/MacGill in New York, or from Anthony Reynolds in London.