[Way back in the nineteenth century a rift split photography.  On one side were those who self-consciously wanted to make art out of it, and who pursued effects of various kinds. Ranged against them were the Moderns, who believed that the camera’s technology made an aesthetic of its own, and who admired only plain photography.  By and large, the Moderns won, and the other camp – let’s call them Pictorialists – have had to retreat, but they have never disappeared.] 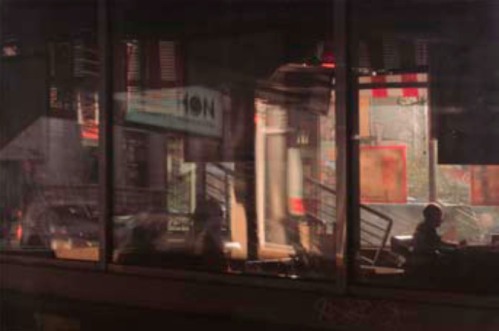 Way back in the nineteenth century a rift split photography.  On one side were those who self-consciously wanted to make art out of it, and who pursued effects of various kinds. Ranged against them were the Moderns, who believed that the camera’s technology made an aesthetic of its own, and who admired only plain photography.  By and large, the Moderns won, and the other camp – let’s call them Pictorialists – have had to retreat, but they have never disappeared.

The advent of digital imagery has changed all that.  If every Tom, Dick and blog reader can make perfectly good ‘straight’ pictures, then there is a premium again on fiddling about to make something which can be ascribed to a style, not solely to the machine. The movement is certainly grass-roots: apps such as Hipstamatic, which apply formulae to the digital files in smart phone photography to turn them into something a little stylized, are hugely successful. But it is to be seen among the Premier League of photographers, too.  Stand by for a revival in the auction values of the great Pictorialist masters of the past, such as Leonard Missone and Heinrich Kuhn and Constant Puyo and Robert Demachy.  Two recent shows in London showed the tide turning.

Annie Leibovitz is a photographer who has long sniffed the wind of fashion.  She made her reputation as a creator of portraits of celebrities, mainly in entertainment, to reinforce the carefully created ‘images’ already made for her sitters by their armies of ‘image-makers’.  Then, not long ago, she sniffed the confessional, autobiographical wind, and did a bit of that. She has also made sure to be considered as something of a celebrity in her own right.  Tales of diva-ish behaviour have been heard.  There was even a storm in a teacup of lèse-majesté in connection with a commission to photograph HM the Queen, although in that case it turned out that the BBC had substantially misrepresented her. Leibovitz is a populariser of other people’s ideas who (because so many of her clients are in creative businesses) has found it convenient to let herself be thought more edgy, more original than that.  When a commercial juggernaut on the scale of Annie Leibovitz cottons onto a trend, we may be sure that it has a deal of heft behind it.

At Hamiltons, Leibovitz showed pictures from her new Pilgrimage series. The idea is to make portraits by association.  It is to examine whether or how the aura of the vanished hero persists in his or her artefacts and landscape.  The pictures were made with light digital cameras, a departure for Leibovitz, which might have allowed flexibility, perhaps a degree of impromptu levity, even some suggestion of movement.

It has been an unsuccessful experiment.  These – with a handful of quite striking exceptions –  are as wooden and uninspiring a group of pictures as you could hope to find in a long day’s march.  The group of heroes is too dull, for a start, a routine high-school cross-section of the kinds of people who end up on stamps.  Let’s see: Elvis. Emily Dickinson. Abraham Lincoln. Freud…  They’re also really not very well made.  In Ansel Adams’ dark-room, Leibovitz failed to solve the one technical problem she set herself, of photographing under the safelight, so all that results is a murky red image, with a fraction of blur where the timer had ticked on as her shutter remained open. Thoreau’s bed is a delightful wicker thing like an Indian charpoy, but Leibovitz has managed to photograph it turned on its side so it has a clunky yellow line across its middle, and grey blobs of lethargic shadow underneath, which destroy the light airy grace of the thing itself.  If you had asked a jobbing photographer to collect some impression of each of these people’s stuff, he would have come back with these pictures.   They add up to no more than a glum tribute to a bunch of former celebrities, and they are depressing.

As fine prints, though, they had to be made somehow special, lest they be mistaken for regular photographs by the jobbing photographer.  And this is where the Pictorialism comes in.  For these are pigment prints, that is to say prints made with colours more like inks or paints than anything light sensitive.  They are, by the standards of today, small prints, and the dense tones that the printers have managed to achieve are special.  There is a picture here of a specimen bird brought back by Charles Darwin which is thrilling in the subtleties of the colours of the plumage.  Another good one, although slighter, is a paper target bearing a blood-red heart shot by Annie Oakley.

The examination has an old and honourable history in photography:  is there an aura, transferable through the objects our heroes held intimately close?  The idea that a photographer should in some sort make a return to primary sources is interesting.  What is odd here is that the handful of good pictures is so very strong, when the majority is so plodding.  Perhaps the law of averages clicked in somewhere along the line.

Across town at the Michael Hoppen gallery, another set of prints on a somewhat parallel investigation showed how it should be done.  Boris Savelev is a Russian former rocket engineer, who first appeared to Western eyes as one of the ‘unofficial’ photographers allowed to be seen by perestroika.  Savelev does not work in series, preferring to make single images which he then occasionally groups for display.  His subject matter is urban landscape (occasionally lightly peopled), but it is better to say that he describes the hard work light has to do in an urban environment, bouncing off rippling metal surfaces and tripping through chicanes of more-or-less translucent screens.  Savelev loves light, and he loves accents of colour in larger areas of drab. This is photography as picture making, which asks not so much to be unpicked for political or historical readings, as to be wallowed in. So much so that it is hard to say that these pictures are actually about anything much at all.  They are constructions of mood, rather like certain musical studies are ‘Etudes’ in one sentiment or another.  Savelev is wonderfully complex in his compositions, and wonderfully luxuriant in his colours.  They are close in feel to the early colour works of Saul Leiter, recently brought forward again by a good publication, but they really descend from those pictures made in the very early years of the twentieth century expressly to prove that photography could be as ‘noble’ as any other medium.

Savelev, too, owes a huge debt to his printers.  If anything, he is even further down the Pictorialist route than Leibovitz, for in his case the pigments are applied on gesso, that most venerable of sizing materials familiar from the history of painting.  And, for good measure, they are then waxed and polished, and the edges of the aluminium sheets upon which they are made are hand-painted to convey the illusion of the picture surface wrapping around.  No detail overlooked: photographers who want to be artists go a very long way to make photographs which don’t look like just …photographs.   Some of what they do will be facile, meretricious.  And some will be very beautiful indeed.

2 thoughts on “The New Pictorialism”