I have been indifferent to Rankin. I’m not a follower of fashion, and have never had much interest in which brand he has favoured with his efficient but derivative image making. I’ve been to a number of his exhibitions, but can’t remember ever reviewing one. Rankin is one of those photographers whose style is the absence of style. When you see a single picture of his, you can’t tell it’s by him, and when you see a number of them together, you can’t tell whether he was deeply involved in the subject or merely contracted to it.

Rankin has often, for example, exhibited his pictures of his partner, the model Tuuli, and I have consistently been unable to see any special affection in the pictures that might distinguish his treatment of her to that of his other models. To be precise, I don’t mean merely pictures in which the model happened to be his wife: it might be quite wrong for those to have any legible trace of their private relationship. But Rankin has exhibited pictures specifically as a love story, and those come out looking just like any other nice clean cheerful safe pictures of a woman. Rankin can certainly supply you with a pout, a smile, sultry come-hither eyes or what have you. Bags of what looks like energy or charm. But there is something mechanical in his photography beyond which I have found it difficult to get to anything more interesting.

No doubt precisely that contributes to his very considerable commercial success.

If you want conventional unchallenging studio photography which presses simple emotional buttons with no great demand upon the viewer (and that is exactly what a large majority of commercial clients think they want), Rankin may well be your man. He is not, I find, particularly interested in trusting the pictures to do his communicating. He is happy for his pictures to take their overtones and undertones from the words which accompany them. The pictures are just-so; they do an excellent job. But they never challenge you to rethink your world, never ask to draw upon deep reserves of memory or understanding. Rankin does not weave complex patterns of ideas, of the kind which photography weaves so successfully out of allusion and quotation and reference. He does not dance that constant lovely edge between what we are made to see and what we know already.

In the terms I have used earlier in these pages, he may not even be a photographer at all, although there is no doubt of his mastery as a camera operator.

Or so I thought.

I went a few days ago to Liverpool, to see the various manifestations of the Look/13 Festival. Rankin is showing at the Walker Art Gallery, a very ho-hum sort of exhibition entitled ALIVE: in the Face of Death. It tells heartening stories about the drive and vigour that some people can show under tough medical circumstances, and most of the pictures are relentlessly jolly. The majority are portraits of the patients or former patients themselves, with a few footnotes (such as a group of professional Ghanaian mourners) thrown in. It’s not at all a bad idea to speak in public of death more than is the norm in Britain, and the Walker is to be applauded for that. A few visitors will indeed be heartened by the show, and will take away from it a mental picture of resolve or gaiety or some similar linear characteristic. Most of the pictures are nothing more than illustrations of the thesis and they are completely missable. Yet in among all that, I confess to my considerable surprise, Rankin has put a group of astounding portrait studies which not only make the show worth seeing but also made me wonder if I should begin to rethink the photographer. 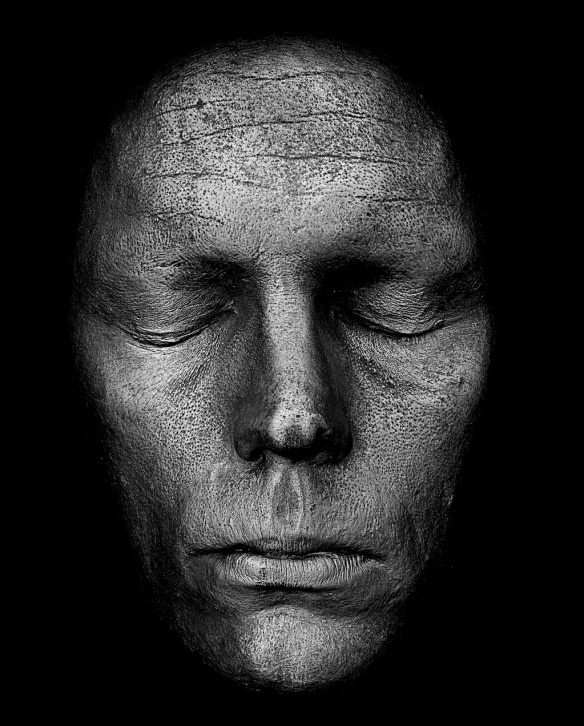 Rankin calls these portraits life masks, and I had thought that they were no more than a rendering of a still face by one photographic technique or another. But it seems they are not: in April of 2013, The Scotsman published Ian Rankin’s (the novelist’s) own pictures of his face being moulded in plaster, presumably for the sitting with his namesake photographer. They really are pictures of life masks.

The first thing I liked was how universal the people become under these circumstances. A degree of difference is maintained by the sheer age or youth of skin: the model Abbey Clancy plainly has a smoother mien than Ian Rankin. But all these heads photographed exactly the same way become studies of mankind as well as just studies of people.

They are, of course, a typology. You can photograph any number of variants of an object the same way, and hope to find some revelatory common ground between them. That is an idea so tired it has not much left to yield. But life masks go right back to the very beginning of photography on at least two counts.

To have such a cast made – even with quick-drying plaster – demands the kind of stillness that has not really existed since the long exposures of the very early days of photography. Daguerreotypists frequently used a head clamp, to enforce stillness. Real stillness is not merely a technical matter: it changes the psychology of being portrayed.

That stillness does things to the face being photographed, and to our reading of it. W.M. Hunt has amassed an entire collection (published in The Unseen Eye) of photographs in which the eyes of the sitter are closed, or masked in some way. He has a particular affection for pictures in which the eyes are masked by a chance effect which then gives an extra something to the photograph. He explains that this gives some reading of the unconscious, and he may be right: certainly it is by the eyes that we most usually engage with each other. Masked eyes automatically mean that some engagement less than usually direct is going to be involved. 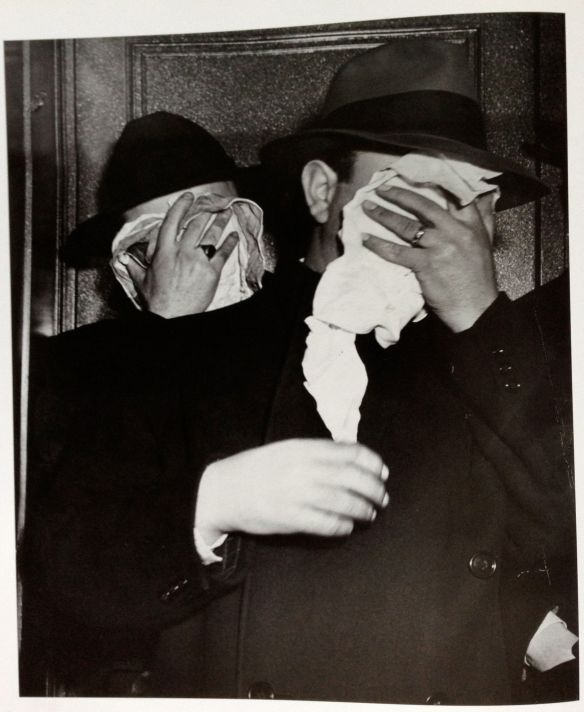 Weegee, Arrested for Bribing a Basketball Player, 1945.
This is one of the accidental masks reprinted in WM Hunt’s brilliant Unseen Eye, Thames & Hudson 2011 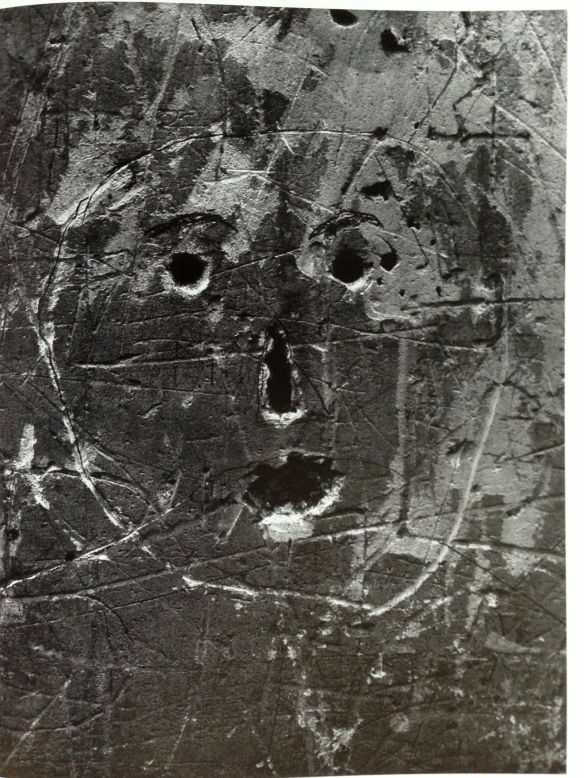 One of Brassai’s graffiti series. Undated between 1935-50.
Also from WM Hunt’s Unseen Eye.

The second reason I say life masks go right back to the earliest days of photography is that photography absorbed some of the main ideas of physiognomy, ideas very current in the decades before photography which survive within photography even though substantially discredited elsewhere.

Masking is intrinsically challenging. One part of photography’s appeal to most viewers is a strange element of voyeurism. Not that all subject matter is looked at with sexual eyes, but that there is a recurring pleasure in being able to take more time to view with intensity and concentration than is afforded when looking at things in vivo. Look carefully in the real world, and you are always out of time before you can have fully grasped what you see. Look carefully in a photograph and things (physical and associational) appear which seemed to have been hidden. That produces a pleasure in seeing: it provides its own rewards by revealing more or revealing otherwise. Masks both repel that kind of scrutiny and invite it. I defy anybody not to look harder at a mask than they do at a face. It’s almost as if the mask carries within itself the invitation to unmask if you dare, to unmask if you can. Look hard enough at a mask and it might just dissolve.

One of the grid of 24 self-portraits masked in shaving foam that make up Marcus Coates’ British Moths, 2011

I wrote on these pages not long ago of the shaving-foam masks of Marcus Coates, in a piece called British Moths 2011, which continues to intrigue me. On that same occasion I mentioned Erwin Blumenfeld, who used masking as an absolutely central weapon in his armoury. Blumenfeld would mask the model in an amazing variety of ways, including using strobes with a telescope attached that allowed him to use light itself as a mask. But he also used bobbly glass, venetian blinds, heavy shadow… The new (May 2013) exhibition of Blumenfeld’s fashion work at Somerset House in London contains a number of masks or images dependent on masking, and some of them are very close in conception to Rankin’s series at the Walker.

Erwin Blumenfeld, Mask, Paris, 1936.
Blumenfeld was obsessive at masking and felt that hiding was an invitation to reveal.

A catalogue of masks in photography would certainly be enormous, ranging over factual anthropological studies, a host of make-up effects in fashion, various kinds of sport, and the unwitting masking of the kind that W.M. Hunt assembled in his book. S&M masking is a subject in its own right. The humble pair of dark glasses may be no more than a sketch of a mask, a request to be viewed as though masked, and therefore a plea to be unmasked.

I’m interested by the idea that the face is only one small remove away from a mask all the time. By a minimum of manipulation, a photographer can turn a face into a mask, and by doing so redouble its compelling force to be viewed. That manipulation can be through a physical process of mask making, as by Rankin. It can be by a manner of photographing, as for example by the German modernist photographer Helmar Lerski. 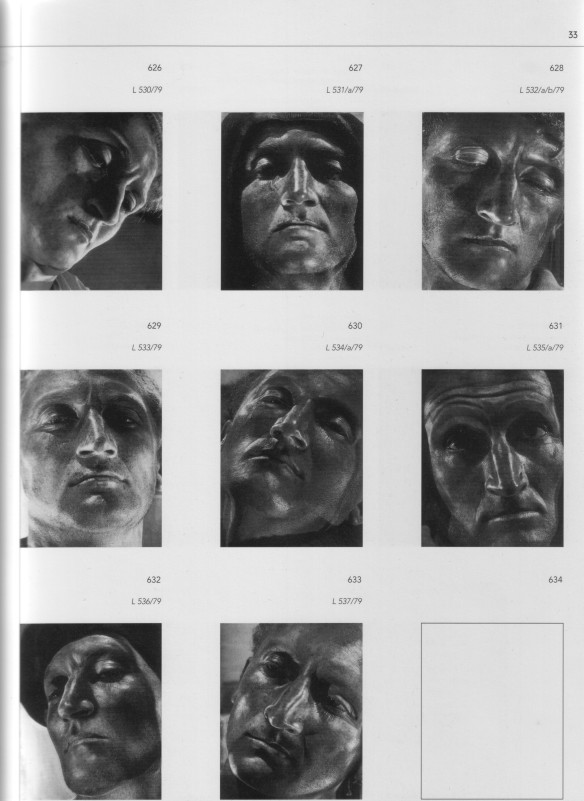 A page of Helmar Lerski facial studies, from Florian Ebner’s Metamorphosen des Gesichts (with thanks to Bernhard Schulz).
Lerski achieves a close approach to Gothic statuary.

One of the great successes of the Tate’s 2007 exhibition How We Are, curated by Val Willams and Susan Bright, was the fresh impetus given to the beautiful portraits of destroyed faces by Percy Hennell. Hennell was a technically inventive specialist in colour photography who worked in the Second war in a number of Royal Air Force hospitals. Many of his pictures of the reconstructive surgery undergone by patients (often after severe burning) are in the collections of the Royal College of Surgeons. We stare at a Hennell sitter with a terrible mixture of pity and fear and relief that such a thing has not happened to us. We also stare hoping against hope to find legible marks of character behind the disfigurement. In Hennell’s pictures, the mask is often of a peculiarly extreme kind. It is a still a mask, but made of flesh itself. And that, oddly, seems to be not so extreme after all. It seems that all faces are masks when seen in a certain light.

Percy Hennell,
Wartime injury of the left eye which has been removed and replaced with a flap of skin taken from the scalp or forehead which is bandaged, n.d.

The phrase at the top of this page is from Thackeray’s English Humorists, where he writes in the chapter on Swift: “Harlequin without his mask is known to present a very sober countenance, and was himself, the story goes, the melancholy patient whom the Doctor advised to go and see Harlequin”.

9 thoughts on “Harlequin Without His Mask”